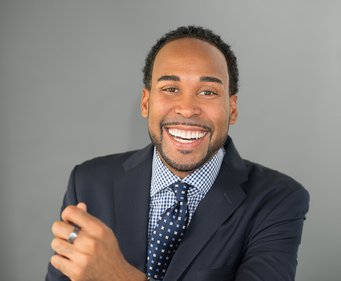 David J. Johns is known for his passion, public policy acumen and fierce advocacy for youth. He is an enthusiast about equity—leveraging his time, talent and treasures to address the needs of individuals and communities often neglected and ignored. A recognized thought leader and social justice champion, David’s career has focused on improving life outcomes and opportunities for Black people.

On September 1, 2017, David Johns began his next life chapter as the executive director of the National Black Justice Coalition (NBJC)—a civil rights organization dedicated to the empowerment of Black lesbian, gay, bisexual, transgender and queer (LGBTQ) people, including people living with HIV/AIDS. NBJC’s mission is to end racism, homophobia, and LGBTQ bias and stigma.

In 2013, Johns was appointed as the first executive director of the White House Initiative on Educational Excellence for African Americans (Initiative) by President Barack H. Obama and served until the last day of the Obama Administration in January, 2017. The Initiative worked across federal agencies and with partners and communities nationwide to produce a more effective continuum of education and workforce development programs for African American students of all ages. Under his leadership, the Initiative studied the experiences of students—leveraged a partnership with Johnson Publishing Company (EBONY Magazine) to produce a series of African American Educational Summits (AfAmEdSummits) at college campuses throughout the country, where the only experts who sat in front of the White House seal were students as young as elementary school. The recommendations that students made at AfAmEdSummits have been used to improve policies, programs and practices, including curriculum, designed to ensure that students thrive—both in school and in life.