With the support of CIS, our students stay in school, graduate and go on to bright futures. They all have a story about their journey to who they are today. Alumna Manda shares hers. 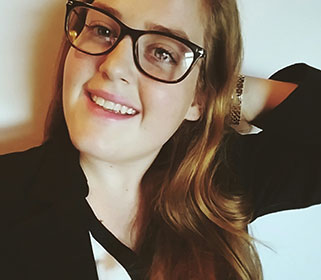 I started out as a punk little high schooler, skipping class, breaking rules and opposing any sort of authority. I disguised hating myself by hating the world around me, but at the end of the night it was me who was bleeding. Cutting was the only coping mechanism I knew to be effective. It was a game of distraction really, and pain has a way of demanding your attention. As long as I focused on the way I was hurting in the moment, I didn’t have to relive the hurt that plagued my mind every day.

I met my Communities In Schools site coordinator, Ms. Tribble, the spring semester of my sophomore year in high school. When I first met her, I was not into the idea of talking about my life in an office with a lady I didn’t know. It wasn’t until after I left my weeklong stay in the hospital, following suicidal ideations, that I really began taking our meetings seriously. The day things changed I remember sitting in her office at one of those white fold-out tables with metal legs. I was drawing lines over and over again on a blank sheet of paper, pretending she wasn’t there, and letting the words pour out of me.

That day, I peeled back just enough of my layers so Ms. Tribble could see the rough edges of a heart that longed to heal, but was always held back by the idea that I’d only ever be a reflection of the horrors I had lived through. For so long I believed that this lie, and all the ugliness that came with it, held power over me; that at 16 years old I was still as helpless as I was at six. And because of that, I had bottled everything up and allowed the pain to rot me from the inside out. But talking with Ms. Tribble made me feel different. When my teachers had seen me as nothing more than a “problem child,” Ms. Tribble saw all of my potential boiling beneath the surface. And when I told her “I hate you,” she only ever heard, “I need you to love me because I don’t know how to love myself.” Everywhere else I had been required to mask myself in some way, but in her office I could expose parts of me that I would not dare let the world see. She looked at me like I was a human being. Not like a case that had to be managed, but like a whole person. And when I cried because no one had ever fought for me, she asked me why I wasn’t fighting for myself.

Ms. Tribble always gave me full credit for everything I did. When I began investing in myself she made me feel like I had finished a marathon, and maybe in some sense I had. But looking back, I know that I was able to do those things because she invested in me first. She gave me her affection and devotion knowing that one day, because of this, the voice in my head could echo the words she told me every day. You reap what you sow, and so she planted love and patience and forgiveness in my heart. Not because she thought I would give back to CIS, but because she believed that I was worth caring about. Ms. Tribble let me know that what I felt was valid. She never tried to fix, but to understand.  And after all those years of hearing her say, “I love you, Manda,” for the first time in my life, that voice in my head has started to whisper, “I love Manda, too.”

This is what Communities In Schools is about; not saving someone, but standing by their side as they save themselves. I have found a voice that was taken from me before I could learn to speak, and now I want to use it as a means to help others find theirs. A lot of times you hear people in helping professions say things like, “I want to give people what I never had,” and that is truly amazing, but I am so grateful to be the one to say that I want to give people what CIS gave me. I have something that cannot be taught, and that’s passion. And because of how great this passion is to serve, I know I will fulfill my dream some way, somehow. I see a light in my local affiliate and that is why I want to devote myself to CIS.

I spent my summer as a CIS Alumni Leader in my local affiliate’s College Bootcamp, which matches college sophomores and above to mentor first year college students.  I poured everything I have into the students that I worked with only to feel even fuller at the end of the day. Lives were changed in two months because of the dedication of leaders such as myself. Imagine the impact we could have everywhere else if walking the graduation stage didn’t mean walking out of CIS. This is a support system with roots deeper than any family tree. Communities In Schools can change the world, I know that with all of my heart. This program believed in me for so long, and now I believe in this program.